Puppies and even adult dogs are lively and friendly animals that will bring a lot of joy to your lives as long as they are in a healthy physical state. If you are looking for information on how to deworm a dog at home you have come to the right place.

Our pets are very dear to us and dogs, in particular, perform even more roles than just playmates and companions.

Their importance can’t be over-emphasized as they serve as a source of security and help to keep our belongings safe, depending on their breed.

This is why it is very important that you take good care of your dogs and ensure they are in a healthy state at all times.

One of the ways to make sure that your dog or puppy is medically fine and active is by ensuring they are free from worms and other intestine-related parasites or infections. You should also conduct regular physical exams on your dog to check for other issues. What Are Worms And How Do They Affect Your Dogs

Worms are unhealthy parasites that have a huge negative impact on the well-being of adult dogs and puppies as they continually depend on them for nutrients.

Worms are very dangerous as they can kill your puppy if medical attention isn’t given to them.

Your puppy is at risk of being invaded by worms from birth as sometimes they can be born with them, by being exposed to the earth’s surface (soil) or by playing with other animals that are infected by worms.

Types Of Worms Found In Dogs

There are different types of worms. All of them result in negative effects that can pose a massive threat to the health of your dog.

These worms include Tapeworms, heartworms, Hookworms, Ringworms, and Whipworms.

Even though each type of worm has different ways of manifesting and hurting your dog, the blatant truth is that they all have the capacity to kill your dog if you neglect their symptoms or ignore treating them on time.

They can also affect the physical appearance or behavior of your dog.

This leads us to the symptoms of worms or how you can detect the presence of worms in your dog or puppy.

How To Tell If A Dog Has Worms

I will like to share with you many ways to know if your dog is infested with worms. We will discuss three of the most popular ways of detecting this. They are as follows: It is important you check your dog’s feces. There are signs in the dog’s stool if he/she has worms.

If you discover any white, rice-like structure in the feces of your dog, it could be that tapeworm (a type of worm) is present in your dog’s intestine.

Tapeworms can equally be found on the tail of your dog immediately it passes out feces.

Roundworms, on the other hand, are white, noodle-like structures that are also found in the feces of your dog.

Other types of worms often appear in form of small, round eggs in the dog’s feces, though, you might be unable to see them with your normal eyesight.

Once you see any of these signs in your dog’s stool, it is a confirmation that your dog is battling with worms.

You can also determine whether your dog is battling with worms through its vomit. Tapeworm and Roundworm will appear in the same structure as in the feces, while other types of worms will require more detailed analysis to detect them in the vomit. Dogs naturally react to all infections caused by worms, thereby, leading to a change in behavior and physical appearance.

Some of the abnormalities caused by worms include the following:

Coughing: Largely caused by heartworm, and sometimes produced by hookworms and roundworms.

Stooling: Known as Diarrhea, stooling is caused by almost all worms but the grievous case (accompanied by blood) is caused by hookworms.

Loss of appetite, loss of weight and energy, possession of pot-bellied stomach, and itching of skin are some of the unwanted behaviors exhibited by dogs under worms’ attack.

Whenever you notice any of these symptoms in your dog’s behavior, the first thing that you need to consider is that your dog may be due for deworming.

Dewormers are ‘broad-spectrum’ vaccines or medicines aimed at preventing growth, killing the eggs to expel the body of worms.

This helps to stop and prevent further harmful effects of worms on your dog.

The process of actually using this treatment and getting rid of the worms is known as deworming.

In other words, deworming is the medical practice in which drugs or deworming pills are administered to get rid of worms.

See the video to see 5 reasons why it is important for you to deworm your dogs if they have worms.

There are different types of dewormers. All of these work on intestinal parasites and help to treat worms the first type is a tablet which can be added to your dog’s meal (orally) as they are chewable.

See our no 1 recommended deworming pills for puppies and small dogs, for medium-sized dogs, and for larger size dogs. If you are looking for how to deworm a dog at home quickly and easily, these pills will work for you. 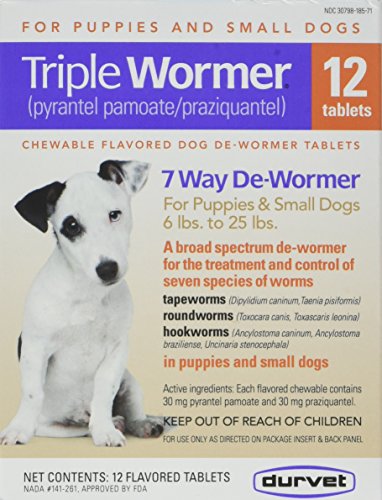 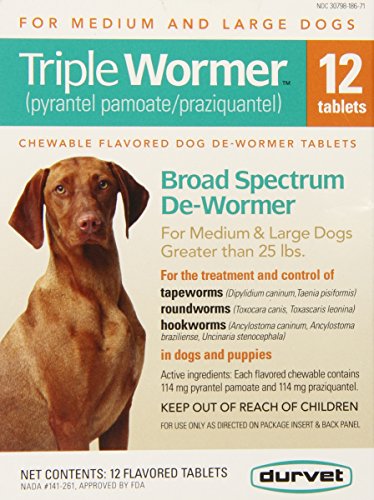 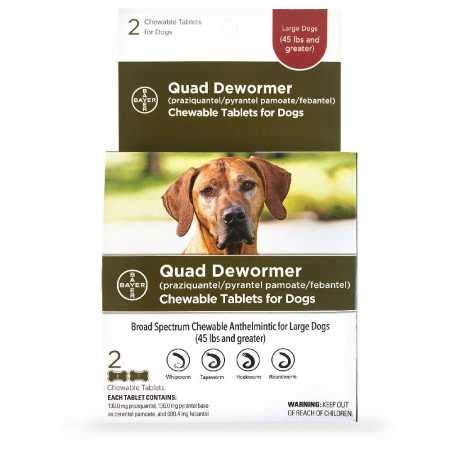 Another type of dewormer is the liquid injectible ones which are administered by vets.

Only experienced vets are allowed to administer this type of dewormers in order to monitor the immediate reaction of your dog after each dose.

How Often To Give Your Dog Deworming Pills

Dog dewormers are not one-time pills, they require multiple doses.

It is advisable you deworm your puppy when they are two to three weeks old as it will get rid of worms inherited from birth.

It has been shown that the first dewormer (medicine) your veterinarian administers to your puppy will last for just 12 hours, and it will have no effect on the worm eggs.

Hence, your puppy is expected to undergo a second deworming process two weeks after the first treatment so as to get rid of all intestine-related worms and their eggs.

It is mandatory you deworm your puppies at least twice a month (every 14 days) until it clocks 12 weeks old.

It is equally important to let you know that deworming your adult dog (six months and above) is very compulsory, and it should be done on a quarterly basis.

How Long Does Dog Dewormer Take To Work

However, the medical status of your dog and the composition or content of the dewormers used, play a huge role in determining how fast they work. What To Expect After Deworming Puppies

Your puppy or adult dog will definitely react to deworming treatment for a few days or weeks, but it is expected to be alright within two months (at most).

A few hours after deworming your puppy, it may vomit which is a sign that the dewormer is having a great effect on its system and the overall body.

This reaction is often associated with tablet types of dewormers.

Some days after deworming, your puppy is expected to have dead worms in its feces because the dewormers have gotten rid of some of the deadly parasites.

This reaction can last for two weeks or three, depending on the number of worms existing in the puppy’s system before being dewormed.

If your puppy continues to show unwanted symptoms of worms more than two months after the deworming exercise, you’re advised to seek the attention of your vet to know what went wrong and how to correct it.

Though this case doesn’t always occur, it is believed that you will need to engage the dog in another deworming exercise should you experience this.

Side Effects Of Deworming Your Dog As important as deworming is to ensure that your pet remains in a healthy condition, this medical exercise has some short-lived side effects on your puppy or adult dog.

Some of these side effects are the dog’s normal reactions to dewormers, while other chronic-but-rare side effects.

Rare but chronic side effects may include such as convulsion, loss of appetite, and tiredness. These should be promptly reported to your veterinarian.

Normal or common side effects of deworming include Diarrhea, nausea, uncontrolled salivation, and probably vomiting. These effects will continue for a few hours after deworming, hence, there is no reason to panic.

Just make sure your dog drinks plenty of water after deworming.

How To Store The Dog Dewormer Pill

Deworming pills come in different sizes and shapes but most of them have the same storing method.

It is advisable you store all deworming pills at moderate room temperature.

Every brand has a perfect way of storing its products, therefore, it is important you read the instructions written on any deworming pill you purchase for your dog.

Can You Use Dog Dewormer On Cats? This is one of the questions many pet owners often ask as they look for ways to reduce their expenses on dewormers.

The good news is that dog dewormers can work on cats but you need to consult your veterinarian before taking such a step.

Praziquantel is an active ingredient in all dewormers (either for cats or dogs), meaning you can apply dog dewormers on cats depending on the type of worms you’re treating.

If your dog is suffering from a tapeworm attack and your cat is under the influence of whipworm, you mustn’t use the same dewormer for both pets as it is very unhealthy and unprofessional.

In such cases, it is very crucial you seek the opinion of a veterinary doctor to know what to do.

How Do You Deworm A Dog At Home

I hope you have picked up some useful tips about deworming your dog or puppy.

Deworming your pet is one of the best ways to help them maintain healthy living and fast-paced growth.

Depending on the situation, you may need to seek the attention of your veterinarian before embarking on a deworming exercise to avoid misuse of dewormers.

Regular or monthly deworming is largely crucial to the health of your puppy as it will help ensure it remains 100% worm-free. Adult dogs only need to be dewormed quarterly (once in three months).

Prevention is better than cure. Therefore, it’s more than necessary that you keep your environment clean and conducive for your dog to stop it from picking up worms from the soil.

Some animals and insects around you can help in the spread of worms.

Mosquitoes are good carriers of whipworms; Rodents and mice can equally spread worms;

You may need to use some sort of insecticide to prevent their presence near your dog or puppy.

Ensure you wash your hands before and after deworming your dogs and take extra care while your dog is on deworming medication to avoid transferring worms into your home as they will put your family at risk.

Let’s keep our dogs and puppies healthy, safe, and happy.